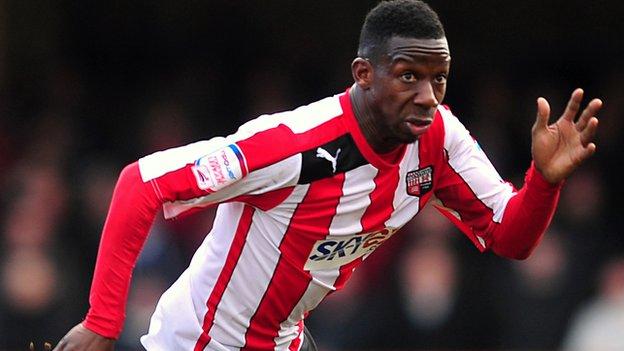 Brentford climbed back up to third place in League One with a win that all but ends Crewe's slim play-off hopes.

Bradley-Wright Phillips headed home Shaleum Logan's cross for his second goal in four games to give the Bees a 12th-minute lead.

Substitute Trotta found the top left corner with a 15-yard volley to earn the Bees' first win in three matches.

While Brentford move to second-placed Bournemouth's shoulder, just two points behind, they also have a game in hand on leaders Doncaster Rovers.

Uwe Rosler's men climb to within four points of Rovers, who they host at Griffin Park on the final day of the season on 27 April.

Crewe came back down to earth with a bump following Sunday's Wembley triumph, stung by two quality strikes from the Bees.

Logan ran on to Crewe old boy Clayton Donaldson's back-heel before crossing for Wright-Phillips to bury the near-post bullet header which fired Brentford ahead.

The Alex then lost keeper Steve Phillips, who came off worse in a challenge with Tom Adeyemi and had to be replaced by Alan Martin.

Bees defender Harlee Dean headed against the bar and Donaldson went close from the rebound with a overhead kick before Martin kept out another Wright-Phillips effort.

Brentford continued to boss the game after the break, Donaldson twice heading over before having a shot saved by Martin after racing clear.

But, just two minutes after coming on, Trotta put the game beyond doubt with a stunning volley.