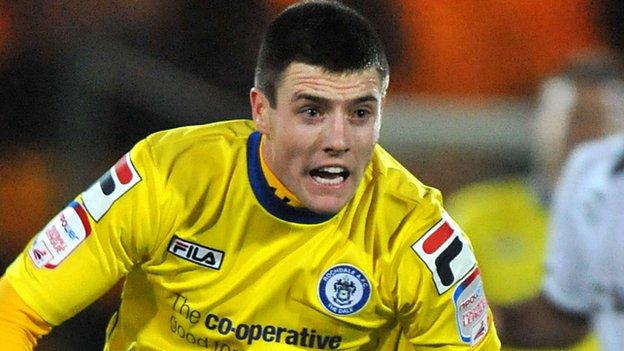 But Grant headed Dale back in front, then fired home a cracker before Ashley Grimes found the bottom corner for 4-1.

Barry Corr headed a late consolation from inside the six-yard box.

But it was not enough to stop Southend, beaten in Sunday's Johnstone's Paint Trophy final by Crewe at Wembley, going a fourth successive game without a win under new boss Phil Brown.

Dale, now up into mid-table on the same points mark as the Shrimpers, were registering a third straight victory in League Two for the first time this season.

The home side took the lead on 34 minutes when Rose was bundled over on the edge of the area, the full-back arising to send the resulting set-piece flying into bottom corner.

Phillips then got the slightest of touches to a Kevan Hurst free-kick to draw Southend level.

But Grant headed home George Donnelly's cross before curling home a 20-yarder to make the result safe for Dale.

Grimes' neat finish rubbed salt in the wound for Southend before Corr, who had earlier hit the foot of the post with a header, powered home a Freddy Eastwood corner.

"We asked the guys to show a test of character, but it's one where we've been beaten by the surroundings.

"I don't mean that disrespectfully. We tried to play football tonight and it's not a pitch to do that.

"We had an abject lesson in how to play at Spotland from the Rochdale players.

"The majority of the night my centre-halves spent their time looking at their own goalkeeper and having to defend balls in behind, whereas we tried to play everything in front of them. It was a lesson on how to play football at Spotland."