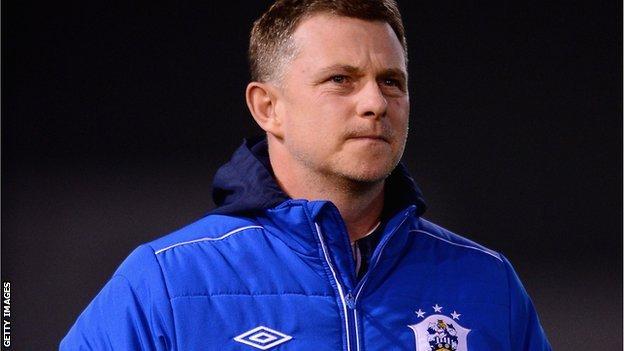 Huddersfield Town boss Mark Robins says he can not believe the position the club finds itself.

The Terriers, who are 22nd in the Championship, lost 1-0 against Bolton on Tuesday evening.

"The league is absolutely unbelievable, but we know what we have to do now," Robins told BBC Radio Leeds.

"We were five points clear of the bottom three after beating Leeds and then after playing one more game we were in the relegation zone."

Points needed for survival in the Championship in last five years

Town are one of four teams, along with Sheffield Wednesday, Barnsley and Blackburn, who find themselves on 47 points. Robins' side have played one more game than all their rivals.

With six games still remaining the Terriers have a points total which would have been enough to stay up in three of the last five Championship campaigns.

"I thought we were brilliant against Bolton and I have got to say I was proud of them," said Robins.

"We kept the ball well and we created chance after chance. I thought we dominated the match from start to finish.

"If we perform like that from now until the end of the season then I can't see a problem. We were really unlucky."

Huddersfield host Peterborough, who currently sit one place and one point beneath them, on Saturday.