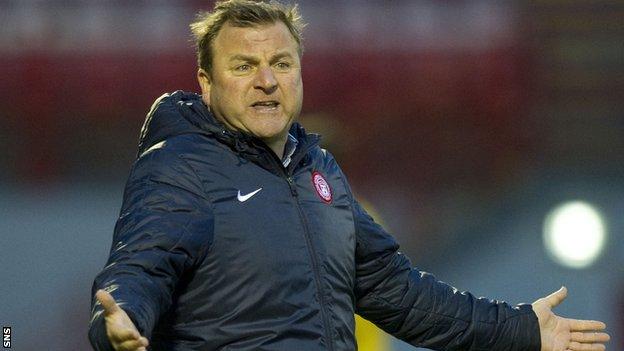 The 49-year-old departs New Douglas Park with the club sitting seventh in Division One, six points above the relegation play-off zone.

However, the Lanarkshire club were relegated in 2010 and have been in Division One since.

Club captain Alex Neil and Frankie McAvoy [academy director] will assume first team duties until the end of the season.

"The club would like to thank Billy for his almost eight years in charge - a period which has seen the club at its highest level in almost 80 years, with three seasons in the SPL - including a 7th place finish - three Scottish Cup quarter-finals and two Ramsdens Cup finals," read a statement from chairman Les Gray.

"The decision to separate was an amicable one. Billy felt he needed a fresh challenge, and the club was like-minded.

"It was simply and naturally felt that it was the right thing to do at the right time. Billy has already indicated that he will be at Dunfermline to support the team on Saturday and will be at the home game versus Airdrie United next Tuesday as well."