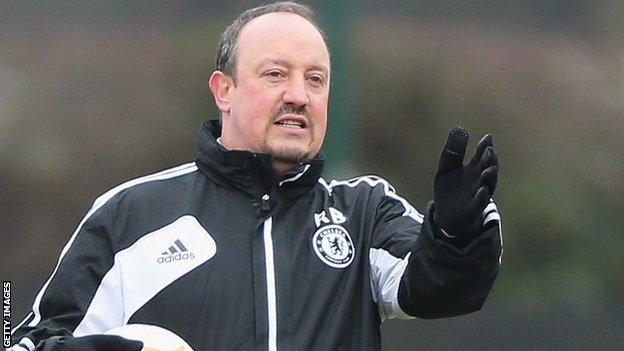 Chelsea interim manager Rafael Benitez would consider staying in England next season if he was offered a job by a leading Premier League club.

The 52-year-old Spaniard revealed in February that he will depart Stamford Bridge at the end of the campaign.

"I like to win, to challenge for trophies. I would like to stay in a top side. A top side, why not in England?" said the former Liverpool boss.

Benitez can still win the FA Cup and Europa League before he leaves Chelsea.

The Blues beat Manchester United on Monday to set up an FA Cup semi-final against Manchester City and Benitez's side play Rubin Kazan on Thursday in the last eight of the Europa League, their third of six games in 16 days.

Ahead of the busy fixture schedule, Chelsea chief executive Ron Gourlay stressed the importance of qualifying for next season's Champions League.

Benitez, who has been a largely unpopular choice among the Blues fans, insists a place in the Premier League's top four remains the priority but would also like to win some silverware in his six months at the club.

"If we can achieve trophies and finish in the top three, fantastic," he said.

"Everybody will be happy. That is my aim at the moment."