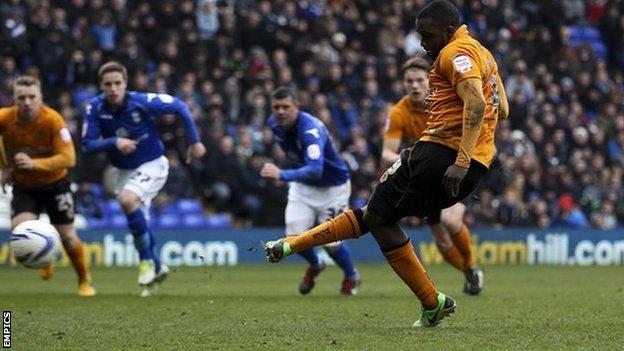 Wolves top scorer Sylvan Ebanks-Blake has been ruled out for for the rest of the season with a broken leg.

The 15-goal striker was initially thought to have suffered only ankle ligament damage in a collision with Birmingham defender Paul Robinson in Monday's 3-2 win at St Andrew's.

But scans have now revealed that he has cracked a bone in his left fibula.

Ebanks-Blake, 27, is the fourth Wolves player to have suffered a season-ending injury in little over a fortnight.

Bakary Sako (hamstring) and Dave Edwards (broken foot) went off within six minutes of each other before the break in the 2-1 home win over Bristol City on 16 March.

Keeper Carl Ikeme then broke a bone in his hand in freakish circumstances after punching a tactics board following heated words in the dressing room during the same game.

"In the space of 16 days and three games we have lost three players with broken bones," said manager Dean Saunders.

"Against Bristol City, we had Carl Ikeme with a broken hand and David Edwards with a foot fracture, and now Sylvan.

"They are freak injuries and they are ones that we could well do without. It was a bitter blow for Sylvan on Monday and for the club too."

The team, meanwhile, go into the final six matches of their season in 18th place, but just a single point above the relegation zone.