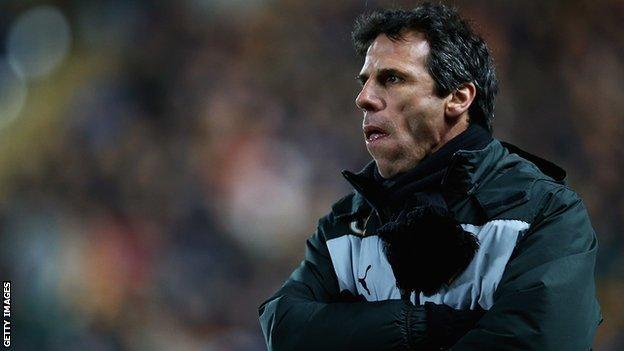 Watford boss Gianfranco Zola has said his side had made up for "silly mistakes" in recent matches by beating promotion rivals Hull on Tuesday.

The Hornets were winless in three games before the

Zola told BBC Three Counties Radio: "All of them realised we've lost points through silly mistakes. We wanted to make up for that and did it in style.

"Every time we've played an important game these players have never disappointed me or the supporters."

Conceding late goals had become a habit for Zola's side throughout March, with last-gasp efforts by Wolves, Blackpool and Burnley costing them a total of five points.

But the Hertfordshire club held on to the lead given them by Troy Deeney's first-half strike and kept a first clean sheet in seven games to move within a point of second-placed Hull.

"Normally we are a side that wants to score goals, we know every now and then we will give some away," said Zola.

"But recently we have given away too many and we made up for that."