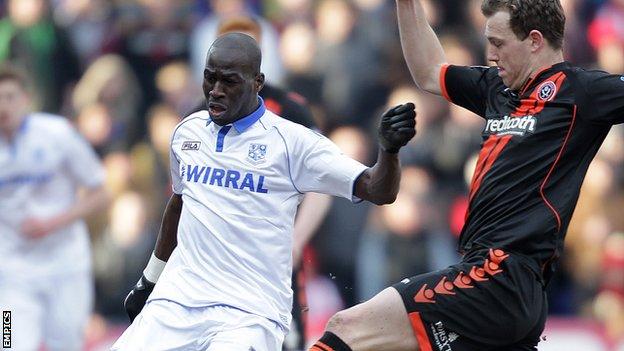 Injuries will prevent on-loan striker Mamady Sidibe and winger Adam McGurk from playing in Tranmere's final four League One games of the season.

Sidibe, who has since joining from Stoke in February, injured his abductor in the 1-0 defeat at Portsmouth.

McGurk but picked up a hip injury in training on Wednesday.

Tranmere have recalled Joe Thompson from his loan spell at Rochdale.

Rovers are currently seventh in the table, two points from a play-off spot.

Speaking after Monday's loss at Fratton Park, manager Ronnie Moore said he needed strikers Sidibe and Jean-Louis Akpa Akpro to find their form quickly if his side are to finish in the top six.

Akpa Akpro has only netted once since 2 October, his first season at Prenton Park having been which kept him out of action for more than three months.

"Sidibe needs a goal and 'Akpo' looks half a yard short of what he's been for most of the season," Moore told BBC Radio Merseyside.

Tranmere Rovers have managed just five goals in the eight matches since beating Colchester 5-1 on 23 February. Three of those came in a 3-1 win over Stevenage at Prenton Park on 23 March.

"Those players are so important to us. When they don't fire, it's difficult for us to win games."

Tranmere suffered successive 1-0 defeats over the Easter weekend, on Good Friday and

Rovers, who led the division for much of the first half of the campaign, are now outside the top six and Moore has appealed for one last effort from everyone involved, including the club's supporters, as they battle to make the play-offs.

"They [the fans] will stick with us," added the 60-year-old. "They know how difficult times have been.

"I didn't hear too many moans and groans on Monday, but that's history now. We've got four games to go and we've got to look forward."