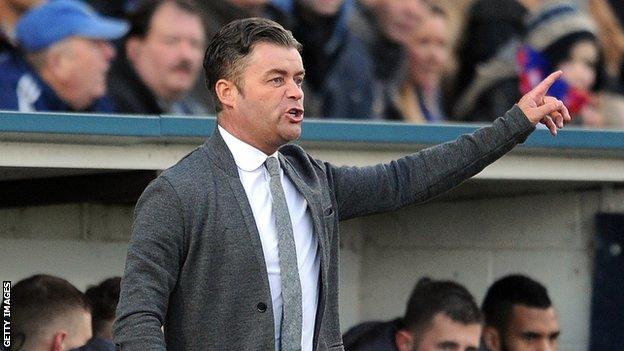 Macclesfield Town have sacked manager Steve King with the side eighth in the Blue Square Bet Premier.

left the Silkmen 12 points adrift of the play-offs with five games to play.

at Moss Rose at the end of last season, following the club's relegation from League Two.

First team coach Pablo Asensio has also been relieved of his duties and youth team manager John Askey will take temporary charge of the side.

Who next for Macclesfield?

"It has come out of the blue but Macclesfield's season is effectively over now.

"There was a lot of chopping and changing with the side and they've used so many players this season. There was no stability with the squad.

"People are touting John Coleman and Sammy McIlroy, who got Macclesfield into the Football League in 1997, as possible replacements."

Macclesfield were winless in their last four games and former Lewes boss King departs with a record of 20 wins from his 48 games in charge.

His tenure, which began following Macclesfield's relegation from the Football League at the end of last season, will be remembered for taking the Cheshire outfit to the fourth round of the FA Cup

The Silkmen saw off Swindon of League One and Championship leaders Cardiff on the way to the last 32, where they were beaten 1-0 by Premier League side Wigan Athletic.

Meanwhile, top scorer Matthew Barnes-Homer is expected to be out of action for the remainder of the season.

The former Luton striker fractured a cheekbone against Wrexham on Monday and will undergo surgery later this week.