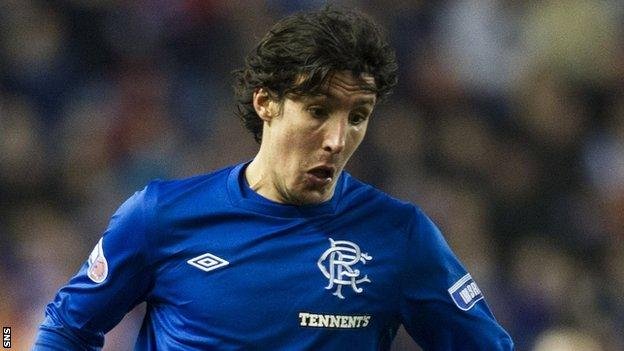 Former Rangers striker Francisco Sandaza will contest his sacking by the Ibrox club.

Sandaza's contract was terminated following a club investigation into a hoax telephone call involving a man claiming to be a football agent.

The striker allegedly disclosed contract details and declared himself interested in a move to another club.

Ranges say the contents of the conversation constitute a breach of contract.

Sandaza is talking to lawyers about suing the club and also the hoaxer who duped him into revealing details of his salary and discussing a move to the United States.

"The club, and our advisors, believe that dismissal is the appropriate course of action," stated Rangers.

Explaining its decision, the club said in a statement: "Francisco spoke at length to someone posing as an agent and engaged in a conversation which the club believes to be a material breach of his contract of employment.

"The player was suspended but after careful consideration and a hearing with Francisco and his representatives, the club, and our advisors, believe that dismissal is the appropriate course of action.

"The termination is subject to the right of appeal under SFL rules and there will be no further comment from Rangers on this issue."