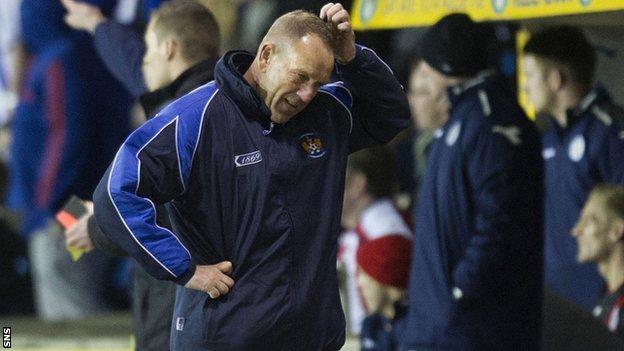 The Buddies led at the break through Esmael Goncalves' strike but Kris Boyd levelled on 47 minutes.

Shiels felt St Mirren were "sharper and better" in the first half and added: "I felt that we came back into it well."

Counterpart Danny Lennon commented: "Overall in terms of the balance of two halves, we're happy with the point."

The result takes Killie a step closer to sealing a top-six place in the Scottish Premier League, with one more round of fixtures to be played before the division splits in two.

Aberdeen and Dundee United trail the Ayrshire side by a point, with Hibernian a further point behind.

"It's not about making the top six, it's about progressing as a club," explained Shiels, whose side host Dundee on Saturday.

"St Mirren is a fantastic team. I'm surprised that they haven't made the top six.

"It's good to get a point against a fantastic team."

St Mirren had the better of the first half and both Goncalves and Steven Thompson had chances to add to the visitors' lead.

"It was an excellent first half for us," said Lennon.

"We certainly could've had it well and truly out of sight.

"We knew that Kilmarnock would come out with a reaction and they certainly did that."