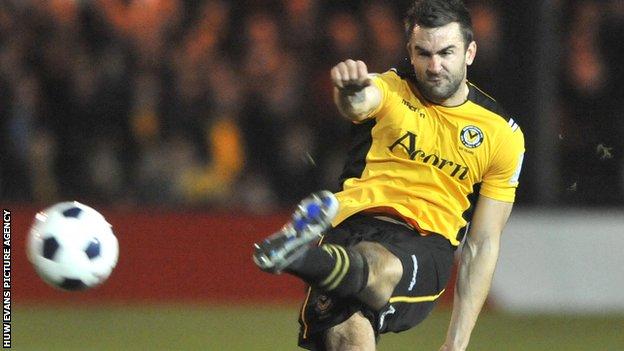 Newport moved above Wrexham into third place in the Blue Square Bet Premier with a thumping win over Macclesfield.

The visitors took a third minute lead when Guy Madjo pounced on a defensive error to set up Jay Burgess.

Robbie Willmott's decisive finish added a third before the break, the winger completing the comeback after Sandell's effort had been cleared off the line.

The victory was a fitting response to the pre-match announcement that manager Justin Edinburgh had signed a two-year contract extension.

Newport still have a slim chance of winning the title but, with three games left, they are eight points behind leaders Mansfield Town.

They are six behind second-placed Kidderminster Harriers, who have played a game more.

"I thought we were excellent. We really passed the ball well and scored some fantastic goals.

"I'm really pleased with the boys that came into the side, I thought they were excellent. All-in-all it was another good night at Rodney Parade.

"After securing our play-off place on Tuesday, it was pleasing we didn't drop our standards."