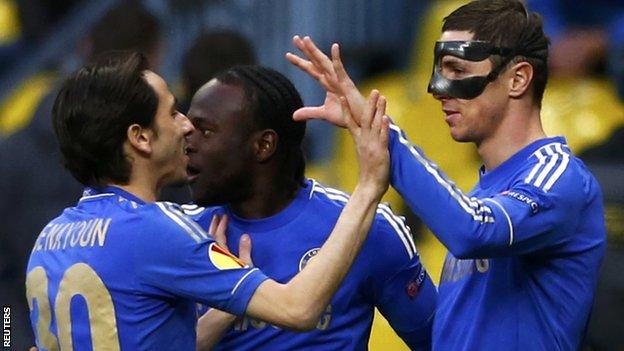 Chelsea sealed their place in the Europa League semi-finals despite a careless second-leg defeat against Rubin Kazan in Russia.

Leading 3-1 from the first leg, the Blues scored a vital early away goal through Fernando Torres's deft lob.

A Gokdeniz Karadeniz strike and Bebras Natcho's penalty gave Chelsea a late scare but they held on to progress.

The Blues never looked in any danger of being eliminated during a comfortable first-half performance after Torres's early opener.

But a contrasting display after the break, characterised by nervous defending on a synthetic pitch, denied Rafael Benitez's side the luxury of a straightforward passage into the last four.

Rubin capitalised on Chelsea's failure to deal with a series of high balls into their penalty area and it gives interim boss Benitez plenty to think about ahead of Sunday's FA Cup semi-final against Manchester City.

Chelsea are bidding to become only the fourth side to win all three of Uefa's major club competitions. The Blues, who won the European Cup Winners' Cup in 1971 and 1998, plus last season's Champions League, would emulate Juventus, Ajax and Bayern Munich.

But they survived any further damage after Natcho's spot-kick made it 3-2 to the home side.

It means the much-maligned Benitez remains on course to win two trophies for the west London club and finish in the top four of the Premier League.

Chelsea's dominant display at Stamford Bridge a week earlier left Rubin with a difficult task, which was made even harder following Torres's early opener.

Frank Lampard showed remarkable vision to send Torres clear with a clinical first-time pass and when Rubin goalkeeper Sergei Ryzhikov raced out of his goal, the Spaniard coolly lobbed the ball into the empty net for his 19th goal of the season.

It left Rubin needing three goals to force extra-time but the complexion of the tie could have been different, had Rubin not spurned a glorious opportunity seconds earlier.

The Russians should have taken the lead when skipper Karadeniz picked out Roman Eremenko in space inside the visitors' penalty area, only for the Finland international to fire straight at Chelsea skipper John Terry.

It was a huge let-off for the Blues on their return to Moscow's Luzhniki Stadium - the scene of their penalty shoot-out defeat by Manchester United in the 2008 Champions League final.

No Blues for Ferreira

Veteran Portuguese defender Paulo Ferreira made only his sixth appearance of the season in Moscow. All six matches have been in different competitions.

Uefa ruled the match should be played in the Russian capital after concerns about Kazan's Central Stadium, and only 19,000 spectators were present in the 80,000-capacity ground.

Rubin boss Kurban Berdyev argued the switch had damaged his side's chances of progressing but, after the early blow of Torres's goal, the Russians gave themselves a lifeline shortly after the second-half restart.

The Russians were left deflated again when Moses stylishly steered past Ryzhikov following a neat exchange of passes with Ramires.

But they refused to give up as Karadeniz climbed above Dutch teenager Nathan Ake, making only his second professional start for Chelsea, to bury Cristian Ansaldi's cross from the left touchline.

Marcano again found space inside the Blues' six-yard box, only to flash a header wide, before Natcho blasted past Cech after substitute Aleksandr Ryazantsev fell under Cesar Azpilicueta's innocuous challenge.

Chelsea saw out the final 15 minutes to reach their 18th semi-final appearance of the Roman Abramovich era, where they will face either Benfica, Fenerbahce or Basel.