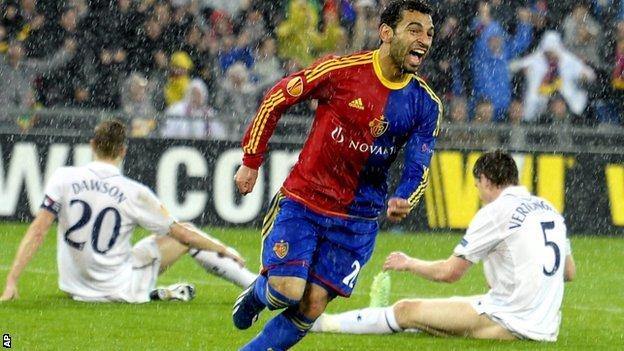 Tom Huddlestone and Emmanuel Adebayor missed as Tottenham lost a penalty shoot-out at Basel to end their hopes of winning the Europa League.

Basel won 4-1 on penalties after the quarter-final second leg ended 2-2 after extra-time, 4-4 on aggregate.

Clint Dempsey had put Spurs ahead before Mohamed Salah equalised.

Aleksandar Dragovic made it 2-1 from close range before Dempsey levelled, while Spurs' Jan Vertonghen was sent off close to the end of normal time.

Basel will join Chelsea, Fenerbahce and Benfica in Friday's semi-final draw after Huddlestone saw his penalty saved and Adebayor kicked his disappointingly over the crossbar.

It was an agonising way for Spurs to bow out of Europe.

But Tottenham, facing a tense fight to secure a top-four Premier League finish and a place in the next season's Champions League, were architects of their own downfall as they made errors at key stages.

Did Emmanuel Adebayor ever look like he had the confidence of scoring? It was an absolutely woeful penalty. It looked like he changed his mind halfway through the run up. The ball soared over the crossbar and it summed up his performance.

Having not won away from home in Europe since December 2011, they could not have wished for a better start after Dragovic's terrible error on a rain-soaked night in Switzerland.

Dragovic looked certain to cut out Vertonghen's 23rd minute through-ball but instead slipped on the greasy surface, allowing Dempsey to skip away from keeper Yann Sommer and roll the ball into the net.

However, the lead lasted no more than four minutes.

Egyptian winger Salah, who caused the Spurs defence countless problems in the first leg, found the bottom corner with a left foot shot after the visitors had carelessly squandered possession in midfield.

Mousa Dembele forced a fine save from Yann Sommer before the Swiss league leaders took the lead - for the first time over the two legs - four minutes into the second half.

Defender Dragovic, who gifted Spurs their opener, scored from close range after Friedel parried Fabian Schar's header into his path.

How the penalty shoot-out developed

In an absorbing contest, Dragovic should have made it 3-1 in the 57th minute from a header before Dempsey forced extra-time with a goal against the run of play eight minutes from the end of normal time.

The former Fulham player brought the ball down on his chest after a hopeful ball forward before finding the net with a left-footed shot.

But Tottenham's joy was once again short-lived, Vertonghen deservedly handed his marching orders after chopping down Streller.

Mohamed Elneny's long range attempt rattled the outside of the post in the 98th minute, but Basel struggled to make the extra man advantage count.

Sommer brilliantly kept out Huddlestone's attempt but, after Marco Streller and Fabian Frei had also scored in the shootout, the Basel keeper was not needed when Adebayor skied his kick high and wide.

Gylfi Sigurdsson did manage to find the net but Marco Diaz's attempt, which made it 4-1, sparked wild scenes of celebration among the home fans.