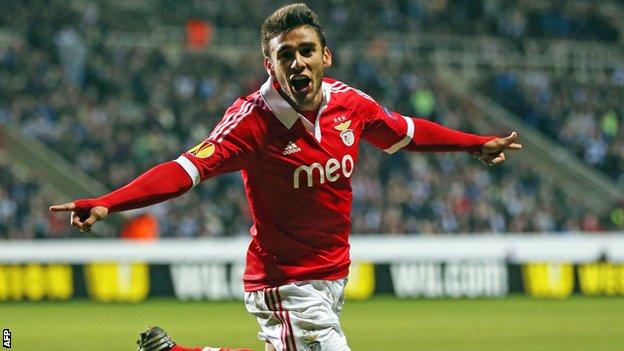 Newcastle were knocked out of the Europa League by Benfica after a late goal ended their hopes of completing a famous victory at St James' Park.

The hosts, trailing 3-1 from the first leg, had two Papiss Cisse efforts disallowed, either side of the break.

Cisse finally put them ahead after 71 minutes from Shola Ameobi's cross to put them within a goal of the semis.

But in stoppage time Eduardo Salvio struck on the counter-attack as the Portuguese side reached the last four.

It was never going to be easy for Newcastle to progress after Alan Pardew's team lost 3-1 at the Estadio da Luz in the first leg in Lisbon, especially considering that Benfica have lost just three games in all competitions this season.

The visitors showed their class in the early stages and Newcastle keeper Tim Krul had to be alert to deny Lima after the attacker pulled off an inventive flick following full-back Andre Almeida's low cross.

The Magpies have taken this competition seriously despite it having a negative effect on their league form this season and manager Pardew resisted the temptation to rest players like Cisse and Yohan Cabaye ahead of Sunday's Tyne-Wear derby against Sunderland.

However, Cisse's threat in the first half was limited - the Senegalese isolated up front with Newcastle struggling to maintain possession.

The brighter Benfica side continued to attack and Salvio went close with a header from Ola John's well-placed cross.

Just before the break, the crowd at St James' Park thought their side had taken the lead against the run of play when Cisse turned in Gael Bigirimana's cross but the assistant referee's flag for offside correctly spoiled the celebrations.

Pardew brought on striker Ameobi at the break and the substitute gave Benfica keeper Artur his first real work of the game when his deflected cross was turned away at the near post.

Benfica failed to turn their pressure into chances before Cisse had another goal rightly chalked off for offside and Hatem Ben Arfa, returning from a hamstring injury that was expected to keep him out for the season, came on for Vurnon Anita.

And the Frenchman was instrumental in the Magpies goal as he worked well down the right to allow Ameobi the space to poke a cross into the area.

Cisse could not be offside this time as the ball came back to him and he nodded into the net with Artur out of position in the 71st minute.

The hosts then pushed forward for a second that would have seen them progress.

Ben Arfa cut inside late on but the Frenchman fired well over before the visitors struck on the counter to end the Magpies' hopes of European glory this season.