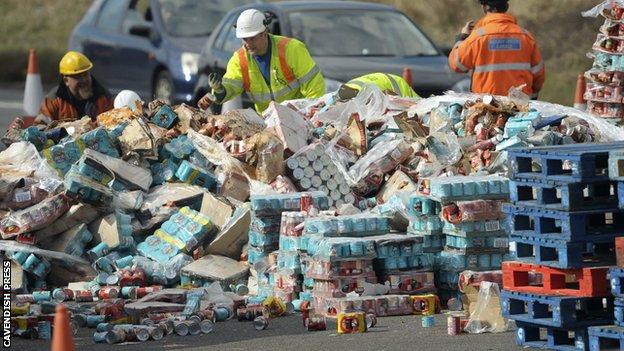 Ebbsfleet's 634-mile round trip to Barrow for a Blue Square Bet Premier match took almost 24 hours after they were held up by a baked bean spillage.

Wednesday's match, which ended 1-1, kicked off 90 minutes late as the Ebbsfleet coach was delayed on the M6.

Fleet manager Liam Daish said he only got back to his home on the south coast at 08:30 BST on Thursday.

"I'm not full of beans at the moment," the former Birmingham defender told BBC Radio 5 live. "It was unbelievable."

The Ebbsfleet team coach set off on the 317-mile journey from Kent to Cumbria at 10:45 on Wednesday, but suffered an initial delay after an accident on the M25.

Ebbsfleet United - where fans have a say on transfers

It then became stuck on the M6 after a lorry crashed near Newton-le-Willows, in Merseyside, and shed its load of baked beans on to the carriageway.

Daish said that his team did not arrive at Holker Street until 20:40 for a game that had been scheduled to kick off at 19:45. The match finally got under way at 21:15.

"We just got really snagged up in traffic," Daish said. "First, we got caught on the M25. Then the second jam was caused by baked beans. You couldn't make it up.

"We travelled through the night to get back, and I walked through my front door at about 08:30 (on Thursday). I've been on the go for 24 hours."

Daish's side look set to be relegated from the Blue Square Bet Premier at the end of this season, while Wednesday night's opponents Barrow are also in the bottom four.

Ebbsfleet took the lead at Holker Street through Phil Walsh, but conceded an equaliser to Adam Boyes and later had striker Nathan Elder sent off. The match finished at 23:00.

The draw has left Ebbsfleet, who have won one of their last 10 league matches, 10 points from a position of safety.

Former Republic of Ireland international central defender Daish, who also played for Cambridge, Birmingham and Coventry, has been in charge of the team since 2005, when they were known as Gravesend & Northfleet.