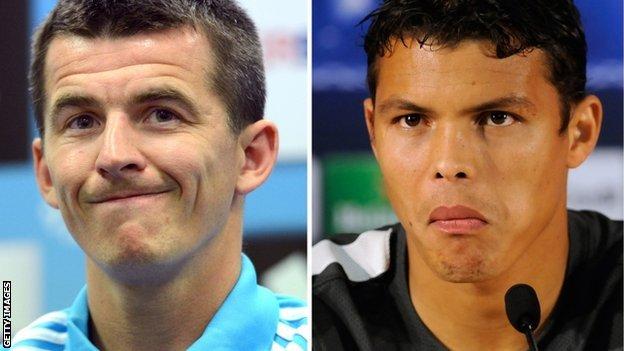 Joey Barton has been summoned by the French Football Federation's ethical committee for abusing Paris St-Germain's Thiago Silva on Twitter.

The 30-year-old labelled defender Silva an "overweight ladyboy" in response to the Brazilian's comments about Barton in L'Equipe on Monday.

The committee has the power to suspend the midfielder for his remarks.

These attacks are serious and go beyond mere verbal jousting

"Joey Barton has been summoned and will be heard on 15 April," said committee president Laurent Davenas.

Marseille and Barton later apologised via a club statement. Marseille manager Elie Baup said that the English player, on a season-long loan deal from QPR, was still key to his plans.

"Barton holds an important place in the team," he said.

"I am the coach of OM and I have to intervene [only] on larger matters. The communication of individual players is their own responsibility."

The club statement, published on Wednesday, read: "Olympique Marseille and Joey Barton wish to apologise to Thiago Silva and his club for the inappropriate comments the English player made on social media in the past 36 hours.

"Olympique Marseille officials have asked Joey Barton to end the row between him and the Paris Brazilian defender.

"The OM midfielder has promised to end right now the publication of any invidious comment against Thiago Silva."

PSG also issued a statement threatening to take action against the player, insisting his "attacks are serious and go beyond mere verbal jousting".

Barton's Twitter outburst is thought to stem from comments made by Silva ahead of PSG's Champions League quarter-final against Barcelona.

In the newspaper article, Silva appeared to make reference to Barton when he spoke about an English player at Marseille whose name he claimed to have forgotten that was criticising top players because nobody was talking about him.

Barton is on a season-long loan at Marseille from QPR.

He made his debut in a Europa League match against Fenerbahce in September and scored his first goal for the French giants in a 2-2 draw against Borussia Monchengladbach in November.

In the same month, the former Manchester City and Newcastle player, who has one international cap for England, was ridiculed on Twitter for adopting a French accent during a post-match news conference.