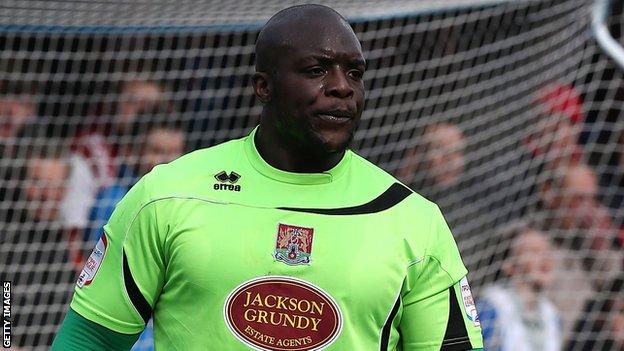 The 30-year-old, whose current contract ends in the summer, has scored 17 goals this season.

Akinfenwa scored seven times in seven matches in November and selling him looked like it would damage Town's promotion hopes.

He hasn't kept up that scintillating form in front of goal but re-discovering it in the remaining games could be the difference between automatic promotion and the play-offs.

But he has found the net only three times in 17 appearances in 2013, including twice from the penalty spot.

Boothroyd told BBC Northampton: "He's getting in positions and missing them at the moment but strikers tend to get goals in batches."

He added: "It's not really a concern for me. A little flurry of 10 goals would be nice between now and the end of the season."

Boothroyd has not categorically stated that the former Swansea, Torquay and Gillingham forward will be offered a new deal at the end of the season, and there was speculation he would leave in the January transfer window.

And the manager admits that speculation "possibly" affected their top goalscorer.

"I think to say [it did not] would be daft because things like that can affect players," he said.

"The best ones get on with it, and he's got on with it. Providing the rest of the team keep creating chances for the front players, I'm convinced we'll score goals.

"Sometimes we didn't get that final ball right or the referee has disallowed a goal that's a goal."