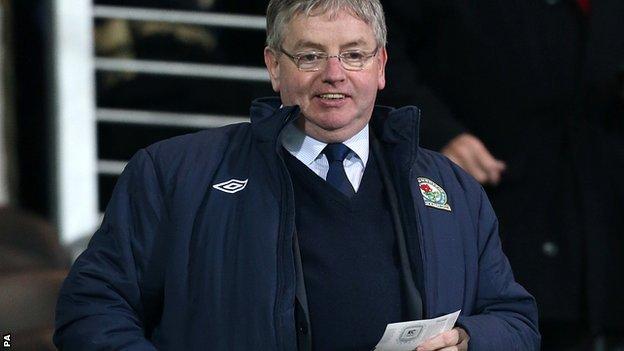 Blackburn Rovers managing director Derek Shaw has been told to stay away from Ewood Park during an investigation into the compensation owed to former boss Henning Berg.

On Wednesday Shaw received notice of the disciplinary inquiry in a letter.

Berg, who was says he is owed approximately £2m and has taken his claim to the High Court.

Global advisor Shebby Singh will fly to India on Thursday for meetings with owners Venky's to discuss the matter.

Shaw's role in drawing up Berg's contract will be one subject discussed by the owners and Singh, despite a club statement that was issued on Wednesday attempting to quash the reports.

The statement said: "The club's owners wish it to be known that Mr Shaw is very much with the club." When asked about Mr Shaw being sent home on Wednesday during the investigation, a club spokesman declined to comment.

Singh declined to comment when approached by BBC Sport, while Shaw could not be contacted for comment.

The investigation will focus on how the terms of Berg's contract were drawn up.

In the meantime Shaw has been asked to stay at home, although it is understood a meeting is planned at the club on Monday.

Singh has been in talks with club lawyers for the last fortnight in an attempt to find a solution to Berg's claim, a case which is being pursued by the League Managers' Association. Berg went to the LMA for assistance after he said he had not been paid any compensation since his sacking.

Former Preston North End chairman Shaw was appointed by Rovers in June 2012, just days after Singh was confirmed as the club's global advisor.

Berg was in charge for 57 days. His successor Michael Appleton was sacked after only 67 days at the helm, with reserve team boss Gary Bowyer put in caretaker charge until the end of the season.

Monday's 3-0 defeat at league leaders Cardiff City leaves the club out of the Championship relegation zone only on goal difference.