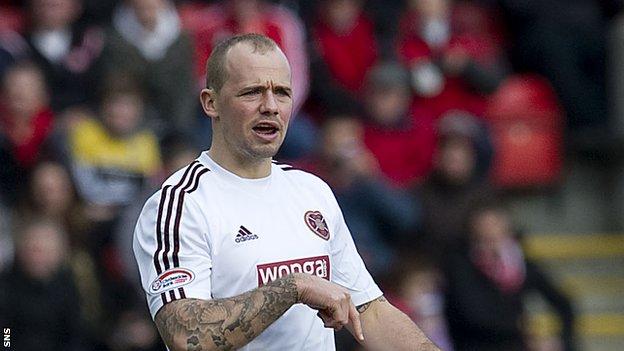 Hearts defender Jamie Hamill is delighted to be back playing following a 12-month injury lay-off.

The right-back, who suffered knee ligament damage in training last April, featured as a substitute against Aberdeen at the weekend.

He said: "You're thinking to yourself 'am I ever actually going to get back from this?'

It's been really good getting back

"It's been really good getting back and it involved a lot of hard work."

Hamill sustained the injury during an indoor training session during the tenure of then boss Paulo Sergio and his enforced absence meant he missed out on playing under John McGlynn.

Gary Locke has since taken up the managerial reins at Tynecastle, with Hamill keen to force his way into the new manager's plans.

"It's been difficult, no doubt about it," said Hamill. "It's not a hard rehabilitation but you've got to do everything right.

"It's been really good getting back, obviously there's been a lot of hard work to get where I am just now and hopefully I'll be back playing in the first team."

"I've got four or five games to get myself (ready) for next season and try to do well for the gaffer," said the defender.

"It's a new chapter at Hearts."