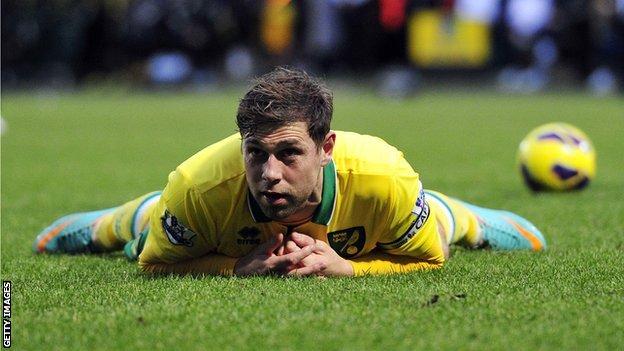 Norwich goalkeeper Mark Bunn is back after a one-match ban, while Alexander Tettey has overcome a knee injury.

Anthony Pilkington (hamstring) is nearing a return, while regular keeper John Ruddy will play a development match on Monday after thigh surgery.

Flores is fit despite aggravating an ankle problem in last week's defeat by Tottenham, and Rangel has recovered from a calf injury.

When Norwich City fans made the gruelling trip home to Norfolk from South Wales in December the conversations in the cars, vans and coaches would likely have focused on a potential top-10 finish rather than the battle to stay up.

The Canaries had just beaten Swansea 4-3 to stretch an unbeaten run to nine matches. But since that win at the Liberty Stadium they've managed just two more.

The gap to the relegation zone has been whittled down to four points, and nerves are becoming frayed. Although Chris Hughton's side remain difficult to beat, their inability to score goals means they are drawing too many games.

"It was a crazy game when these two met at the Liberty Stadium in December, with Norwich scoring three first-half goals then hanging on to win 4-3. I can see them winning again, to edge closer to safety."

It's one point at best rather than all three, meaning small steps towards safety rather than giant strides to clinch it.

On the positive side, they boast a 100% record against Swansea in the Premier League and the visitors arrive at Carrow Road on the back of three successive defeats.

On the road in 2013 the Swans have been woeful, collecting just two points from five games and scoring only once along the way.

Michael Laudrup recently challenged his League Cup-winning squad to reach the 50-point mark which he believes would represent a fantastic achievement. It should be within their reach, however of late it seems to be their opponents who have more to play for. Norwich certainly have the greater incentive for the three points this weekend.

If current form suggests goals will be at a premium, recent history implies the opposite. There have been a massive 16 scored in their three Premier League meetings with ten coming from the feet or heads of those in canary yellow.

This time Norwich fans would happily settle for just the one off a knee or backside as long as it brought with it all three points.