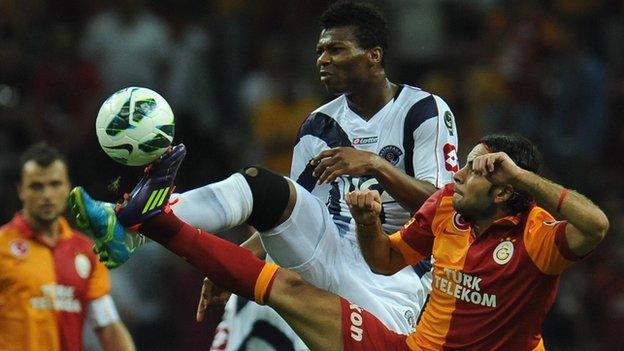 Nigeria have recalled Kalu Uche to their squad for the upcoming 2014 World Cup qualifiers, friendly matches and Confederations Cup in Brazil.

Uche, the second top scorer in Turkey with 16 goals for Kasimpasa this season, last played for the Super Eagles in November 2011.

Also making their comebacks in the 30-man squad are Celtic's Efe Ambrose and Anthony Ujah, who is on loan at FC Koln.

But doubts remain over whether fit-again Emmanuel Emenike will honour his selection for the games.

The African Cup of Nations top scorer has recently criticised the country's coach Stephen Keshi for ignoring him after the Spartak Moscow striker suffered an injury.

And coach Keshi stayed silent when asked if Emenike would definitely turn up for the friendly game in Houston, Texas against Mexico on 31 May.

According to the Nigeria Football Federation (NFF) spokesman Ademola Olajire, the team will open a training camp in Nuremberg, Germany on 15 May.

"The camp will start with locally-based players while the overseas-based players are expected to join the team in Germany as their various leagues come to an end," Olajire told BBC Sport.

"Players in Russia, Ukraine and Norway will join the team only for the matches against Kenya and Namibia, and for the Fifa Confederations Cup tournament."

The three-time African Champions have a busy month ahead starting with the Mexico friendly before facing Kenya on 5 June in Kasarani in a World Cup qualifier.

The Super Eagles travel to Windhoek to play Namibia on 12 June in another Group F encounter on the road to Brazil.

Nigeria play Tahiti, Uruguay and Spain in Brazil but will play two more games if they advance to the knock-out stage, before returning to Africa for a 2014 African Nations Championship qualifying fixture against Ivory Coast.