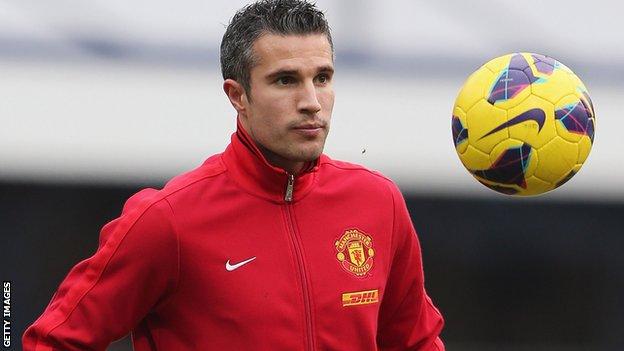 Manchester United manager Sir Alex Ferguson has backed Robin van Persie to find his goalscoring form and insists the striker does not need a rest.

Van Persie, 29, has gone nine games without a goal for United.

But Ferguson is confident that the Netherlands international, who has hit 23 goals for the club this season, will soon start scoring again.

"He doesn't need a rest that's for sure, he's a strong lad with great physique," Ferguson said.

"The goals will come, all strikers have dry spells and you hope it ends quickly, it's part of being a striker."

Van Persie, who joined United from Arsenal for £24m last August, has scored 19 Premier League goals this season, second only to Liverpool's Luis Suarez, who has 22.

His last United goal came in the 2-0 Premier League win over Everton on 10 February.

The striker's shot led to the winning goal in United's 1-0 victory at Sunderland last Saturday, but it was recorded as a Titus Bramble own goal after flying in off the defender's knee.

Ferguson also confirmed that Wayne Rooney is back in training ahead of Monday's derby against Manchester City at Old Trafford.

Defenders Nemanja Vidic and Jonny Evans remain doubts with knocks picked up during at Sunderland, but Ferguson is hopeful that both will resume training soon.

He said: "Wayne and Rafa have started training which is good news. We hope they will be fine by Monday. Jonny Evans and Nemanja Vidic are not there yet but hopefully they will start tomorrow (Friday) or Saturday morning."

Ferguson added: "It's a derby game with a difference from years ago. It's far more important. We have to get used to playing Manchester City in big games."