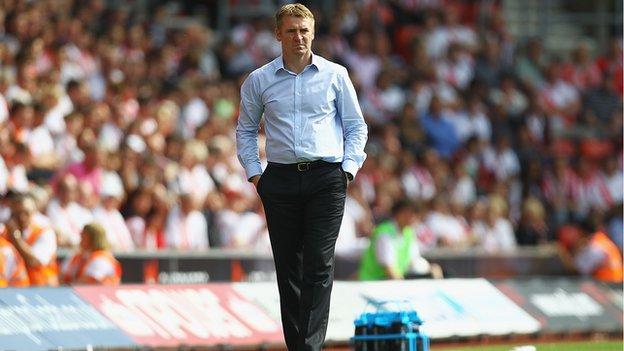 Promotion-chasing Walsall manager Dean Smith is set to wait until the summer before appointing a new number two.

Smith has been without a right-hand man since David Kelly rejoined Nottingham Forest as assistant to Billy Davies, less than a fortnight after replacing Bristol City-bound Richard O'Kelly.

Walsall academy boss Neil Woods has been on dugout duty for two months.

"With a short time until the end of the season, we may let it go and appoint now in the summer," Smith told BBC WM.

Neil Woods has doubled up with the youth team and the reserves, in fact he's tripling up with the first team too, and I'm pleased to have him with me

"I've had four or five interviews, but it's got to be the right fit," he said. "With how things are going here, I don't want anything to be unsettling.

"When Richard O'Kelly went, Ned Kelly was on the doorstep and it all happened very quickly. This one's taken a bit longer, but I just want it to be right."

Meanwhile, Smith says that top scorer Will Grigg has only a 50/50 chance of being fit for Saturday's home game with Sheffield United.

Grigg, who has missed two of Walsall's last three games, is still nursing the hamstring strain which also forced him to pull out of Northern Ireland's squad a fortnight ago.

The Saddlers go into Saturday's home clash with promotion rivals Sheffield United on the back of a superb 12-match unbeaten run.

Easter Monday's 4-0 thrashing of Coventry City came without the services of 19-goal Grigg, but Craig Westcarr and Jamie Paterson filled the void, scoring twice each.