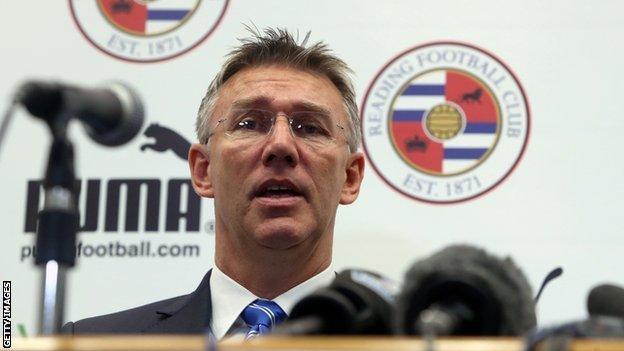 Reading manager Nigel Adkins says he will have nothing to prove when he faces Southampton on Saturday.

The 47-year-old was sacked as Saints boss in January despite leading the club to successive promotions.

"We don't need to prove a point, we all move on, I'm Reading manager now and we look forward to the next game." Adkins told BBC Radio Berkshire.

Adkins added that he will happily shake hands with his successor Mauricio Pochettino before the game.

Never, ever, underestimate the opposition. Sun Tzu - the art of war - is something I've always talked about

"We have already welcomed the opposition management to the Madejski in Saturday's programme," he said.

"We will invite him in for a drink afterwards, win, lose or draw. I think that is important.

"The situation was made and we have to get on with things. I'm at Reading and I'm excited to be here."

Adkins' dismissal came after a 2-2 draw with Chelsea and despite the club being three points clear of the relegation zone.

He says he is relishing the match against his ex-employees, which will also be his first home game as Reading manager.

Reading, who will be without winger Jimmy Kebe, are currently seven points adrift of safety with seven games left and Saturday's fixture is one they must win to have any realistic hope of staying up.

"I'm looking forward to it, it's the next game and we have to win it," said Adkins.

"It's our first home game. The supporters will get right behind the players. It's a local game and a game we have to win.

"We have to concentrate on what we can do. Our focus is on winning the game. Every player in the opposition team is a threat.

"Never, ever, underestimate the opposition. Sun Tzu - the art of war - is something I've always talked about. They will come here to get three points but we want the three points."