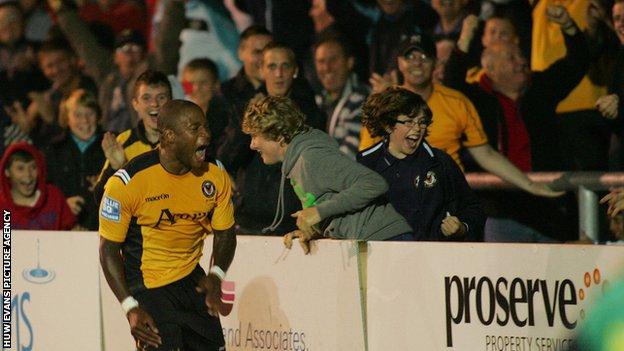 The Welsh side are currently fourth in the Conference table, 10 points behind leaders Kidderminster.

"I would like to see them get automatic promotion, but if they have to go through the play-offs then so be it," said Aldridge.

County have consolidated their position in the play-off race and maintained their title aspirations by winning seven of their last 12 games, losing only twice.

Kidderminster's fine run of form has taken them to the summit, but County have three games in hand on the current leaders.

Despite losing to fellow title rivals Wrexham on Thursday, Mansfield are in the strongest position to grab the sole automatic promotion spot with two games in hand over Kidderminster and only a point behind.

But County, who travel to Cambridge on Friday, are well placed to secure one of the four places in the play-offs, which culminates with a Wembley final on 5 May.

Justin Edinburgh's side lost in last season's FA Trophy final at Wembley to York City and Aldridge believes that experience will prove invaluable should they end up to the play-offs.

"Another trip to Wembley would be nice for them, like last year, and I think that experience will help them and keep them in good stead," said Aldridge, who played for Newport from 1979 to 1984.

"When you play at Wembley, if you have played there before, experience is really advantageous.

"It would be great if they got promotion, I would be delighted."

Newport County were relegated from the old Division Four back in 1988 and went bankrupt in 1989, but the club reformed in its current guise and have risen up through the English league pyramid system to within touching distance of a return to the Football League.