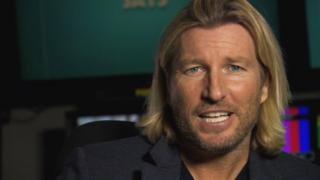 Robbie Savage says Sunderland have made a "good appointment" in handing the manager's job to Paolo di Canio.

The former Wales international also believes that Tottenham's Gareth Bale should be named footballer of the year.

And he reveals who he would choose in his team of the year.

You can send your questions to Robbie via Twitter by using the #savagesays hashtag or via the BBC Sport Facebook page.