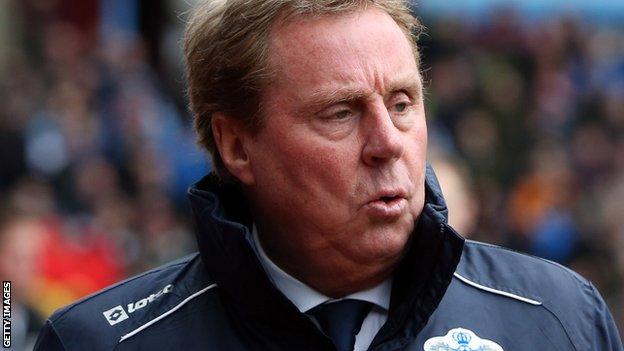 Harry Redknapp has been assured his job as Queens Park Rangers manager is safe even if the club are relegated.

The west Londoners face a tall order to stay up after Monday's 3-2 defeat at Fulham left them seven points adrift of 17th-placed Wigan Athletic.

But QPR owner Tony Fernandes has publicly back Redknapp, who arrived at Loftus Road in November.

"Harry's a fantastic man and I would love to keep him as long as he wants to stay," he said.

Fernandes does not want Redknapp's tenure to follow the route of former managers Neil Warnock and Mark Hughes who were dismissed.

"I want stability more than anything," he said on London Call-In, QPR's official call-in show. "I wanted it with Neil and Mark so it's third time lucky with Harry. I think he is the man.

"We understand each other well and he knows how committed the shareholders are."

Redknapp has spent over £20m on signing Loic Remy and Christopher Samba and Fernandes concedes players will depart at the end of the campaign.

"We will have to sit down with Harry and discuss who we want to keep and who would go," he said. "Obviously there will be players that will go regardless of if we stay up or go down. We want players who can give a lot to the club for a long time."