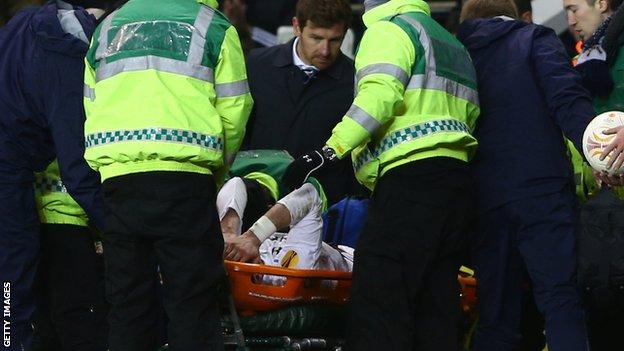 Tottenham winger Gareth Bale is expected to miss only two games for the club, despite being taken off on a stretcher against FC Basel on Thursday.

The Wales international injured his right ankle late in the Europa League quarter-final match, which ended 2-2.

But the results of a scan on Friday were encouraging and Spurs say Bale, 23, could return for the Premier League game with Manchester City on 21 April.

Bale has played 38 times for the London side this season, scoring 22 goals.

A statement on the Spurs website said that William Gallas and Aaron Lennon, who picked up calf and knee injuries respectively against Basel, are also set to resume training within two weeks.

Spurs face Everton at White Hart Lane on Sunday, before travelling to Switzerland for the second leg of the Europa League tie on 11 April.

Their fixture against Chelsea, scheduled for 14 April, has been postponed because of Chelsea's involvement in an FA Cup semi-final.

Bale landed awkwardly on his right foot during a challenge with David Degen in the closing minutes of Thursday's first-leg clash, and was carried from the field on a stretcher, clearly distressed.

Spurs have not won a match in which he has not scored since 1 January.