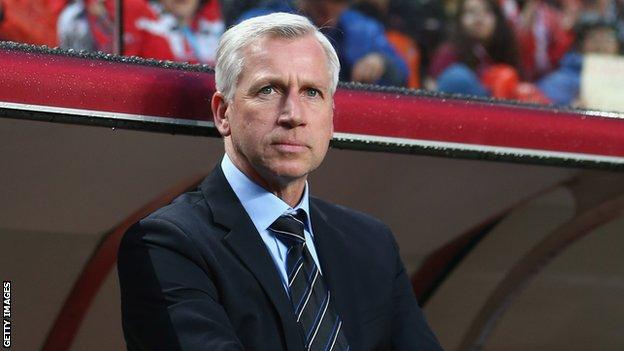 Newcastle boss Alan Pardew admitted his team face an "uphill challenge" in the Europa League after a 3-1 quarter-final first leg defeat at Benfica.

The Magpies went ahead when Papiss Cisse tapped in at the far post but then conceded three goals.

"Apart from 10 minutes at the end of the first half, I thought we were in control," the 51-year-old said. "It is an uphill challenge for us now."

Newcastle need at least a 2-0 win to progress in the return tie on 11 April.

But if Benfica find the net at St James' Park, the Magpies would need to score three goals to force extra time.

On Thursday, Benfica turned the game around with two quickfire goals just after the hour mark after Pardew's side made unnecessary errors at a rain-soaked Estadio da Luz.

With the match all-square at 1-1, Newcastle had started the second half the brightest when Cisse struck the post for the second time, before substitute Lima latched onto a slack back-pass from full-back Davide Santon and scored past returning goalkeeper Tim Krul from a tight angle.

Newcastle then conceded again as Moussa Sissoko ducked away from a header and the ball struck Steven Taylor on the arm.

Benfica's top-scorer Oscar Cardozo held his nerve to place the ball past Krul from a retaken penalty and give his side a clear advantage for the return leg.

"We probably had them just where we wanted them before the second goal and then we conceded two poor goals," Pardew told BBC Radio 5 live.

"There was obviously a mistake for the first of them, but the second was unlucky. It looked like Taylor caught Sissoko's boot-lace with his studs and it has affected his jump and we have gifted them a third."

Despite hovering three points above the relegation zone in the top flight following Saturday's 4-0 thrashing by Manchester City, Newcastle matched their Portuguese league leading opponents for much of the game.

Pardew said he was "overjoyed" with his team's performance, and was convinced he could cause Benfica problems next week.

"The side showed tonight what they have shown in Europe all year, that we are a competitive side," added the former Reading, West Ham, Charlton and Southampton boss.

"We have come up against a very good Benfica side, and with a couple of different breaks in the game, I think we could have come away with a fantastic result.

"I cannot say any more, I was overjoyed with the performance but not the result, that probably sums up my feelings."