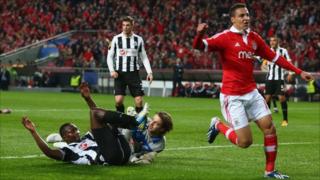 Alan Pardew believes Newcastle "could have come away with a fantastic result" despite losing 3-1 to Benfica in their Europa League quarter-final first leg.

The Newcastle manager admits his side had their hosts "where they wanted them" in the first half, pointing to a few individual errors for letting Benfica back into the match after they had looked "comfortable" while leading in Lisbon.

Papiss Cisse gave the Magpies the lead at the Estadio da Luz and twice hit the woodwork before the Portuguese league leaders fought back to take a two-goal advantage into the second leg on Tyneside.