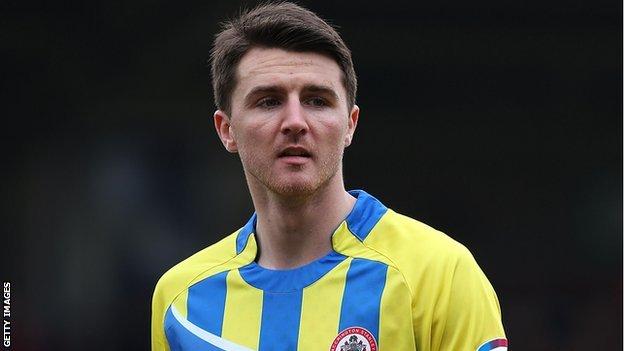 In a lacklustre first half, the hosts took the lead when Lee Molyneux's free-kick deflected in off Peter Murphy.

Some poor Morecambe defending allowed Rommy Boco to run through on goal and his scuffed shot was slotted home by Padraig Amond to double Stanley's lead.

The visitors' best chance came from Robbie Threlfall's dipping corner, which was tipped over Paul Rachubka.

Kevin Ellison had a chance to grab a late consolation for the Shrimps, but his 25-yard drive went high over the bar.

It could prove to be a vital three points for Accrington, who moved up to 18th in the table, although they have played at least one more game than the six teams below them.

After the match, Morecambe manager Jim Bentley confirmed that defender Nick Fenton, who did not feature in Friday's game because of a calf problem, would be leaving the club.

"I'm made up. It's great for the fans and the club to get the win. Whether it will be enough, I'm still not sure. We'll apply ourselves like we have for most of the season and we'll go again.

"Credit to Morecambe, they came out of the traps well and we had to contain them for lengthy periods.

"I thought we were outstanding in the second half. We deserved the goal and we maybe could have got a few more."

"Up until the first goal, we were the better side and on top.

"Goals change games and they had a bit of luck there. We gave a silly foul away and invited the pressure. That's been our Achilles heel this season.

"Teams don't have to work hard enough to score against us and that was the case tonight."