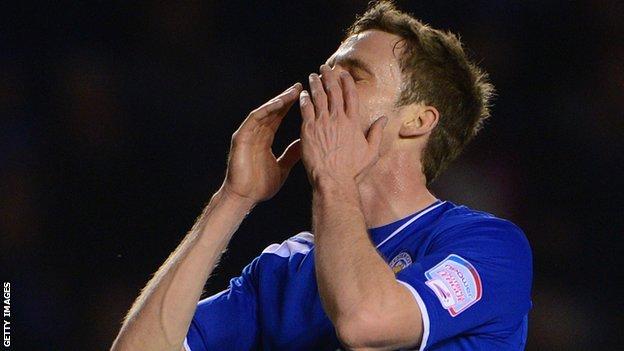 After trailing at the break thanks to a Curtis Davies own goal, Birmingham levelled through Nikola Zigic.

Leicester's Jeff Schlupp got on the end of Matty James's corner to power home a header 15 minutes from time.

Foxes youngster Jeff Schlupp has only scored three of his eight Foxes career goals at the King Power Stadium and, having also netted in this same fixture last season, two of them have now been against Birmingham City.

But Burke equalised from the spot after David Nugent fouled Wes Thomas, despite replays showing it was outside the box.

The Foxes' Thai owner Vichai Raksriaksorn was making a rare personal appearance at the King Power Stadium - and he must have thought his luck was in at the start of the night when the Foxes went in front through Davies's own goal.

Blues keeper Jack Butland touched Nugent's 20-yarder round the post and, from the resulting James corner, the ball flew in off the head of Davies - clearly distracted by the grappling presence of Wes Morgan.

Leicester had the chances to have been further in front by the interval as Michael Keane's header flew just over, Andy King fired straight at Butland and Nugent skewed a right-foot shot wide.

But Lee Clark's Blues - or Pinks, as they were for the night - created chances too.

Nathan Redmond was twice thwarted in quick succession by Kasper Schmeichel's outstretched left arm, first with a low left-foot shot and then with his right. And Shane Ferguson's far-post volley was only kept out on the line by Paul Konchesky's thigh.

Nikola Zigic has now hit nine goals for Blues this season, while Chris Burke's strike was his seventh of the campaign.

The visitors got their reward when Zigic ended a neat move by slotting in Mitch Hancox's low cross from six yards.

Schlupp, denied by two stunning tackles from Davies and Paul Robinson, then blasted against the bar before grabbing what looked likely to be the winner when he met James's corner to bullet home a header from six yards.

But, just as the game was set to move into injury time, visiting substitute Thomas went down under Nugent's challenge and fellow Blues sub Burke slotted home the spot-kick.

While Leicester remain adrift of the play-offs in seventh, Birmingham are eight points shy of sixth spot - and, with only four games left, their outside hopes of sneaking in there are probably over.

At the opposite end of the table, Birmingham's run of just one defeat in seven games has lifted them seven points clear of danger.

Leicester City manager Nigel Pearson told BBC Sport: "We created enough chances to have won but, for the second home game running, we've suffered the disappointment of letting in a costly late goal.

"And the fashion in which we conceded the penalty is difficult to put into words.

"Whether the foul was inside or outside, the ref gave it very quickly without consulting his assistant. He must have been sure.

"It's still do-able for us, but really we've now got to win our last four games."

Birmingham City manager Lee Clark told BBC Sport: "I was really pleased with the performance and would have been devastated if we'd lost.

"But, although I'm pleased to have got something, we can't afford to think we're safe.