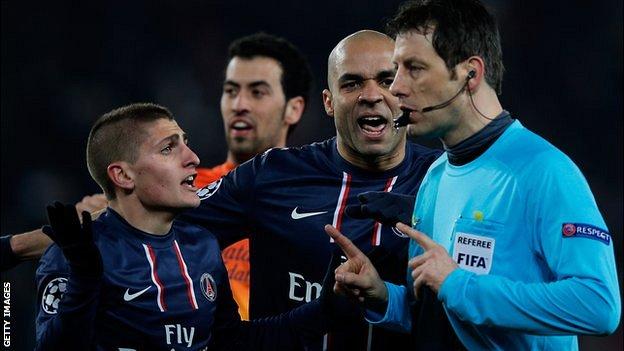 Barcelona have filed a complaint to Uefa about the refereeing of Wolfgang Stark in their 2-2 Champions League draw at Paris St-Germain.

Stark refused to stop play after Javier Mascherano and Jordi Alba collided, leaving both players on the ground.

Barca were also left unhappy that Zlatan Ibrahimovic's equaliser stood after it appeared he was offside.

"It was evident that the referee did not apply the rules of the game," said Barca spokesman Toni Freixa.

"When two players from the same team are on the floor, the referee should stop the match, which did not happen.

"We are fully conscious of the possibility of errors in refereeing and we do not consider ourselves badly treated. But it surprises us that in a high-level competition a referee does not know the rules," Freixa added.

Stark has hit the headlines before when he sent England striker Wayne Rooney off during their 2-2 draw in a Euro 2012 qualifier against Montenegro in October 2011.

Barcelona host Paris St-Germain in their quarter-final second leg at the Nou Camp on Wednesday night.