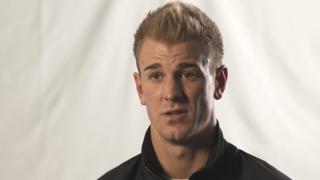 Finishing second will be success - Hart

Manchester City goalkeeper Joe Hart believes finishing second in the Premier League will be seen as a "successful" season.

City are 15 points behind their neighbours Manchester United with seven games to go, including Monday's Manchester derby.

Speaking to Football Focus, Hart says his club "haven't earned" the title this season, but feels City "still have a lot to play for".

Watch the full interview with Joe Hart on Football Focus, Saturday 6 April, 12:15 BST on BBC One and here on the BBC Sport website.