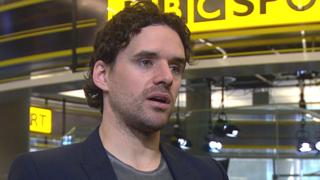 Former England midfielder Owen Hargreaves says Manchester City will be "difficult to beat" and backs them to win the Manchester derby on Monday.

City are 15 points behind their neighbours Manchester United with seven games to go, and boss Roberto Mancini has recently said the title race "is over".

Hargreaves, who played for both clubs during his career, also feels striker Robin van Persie has been "a great addition" to United's squad this season.