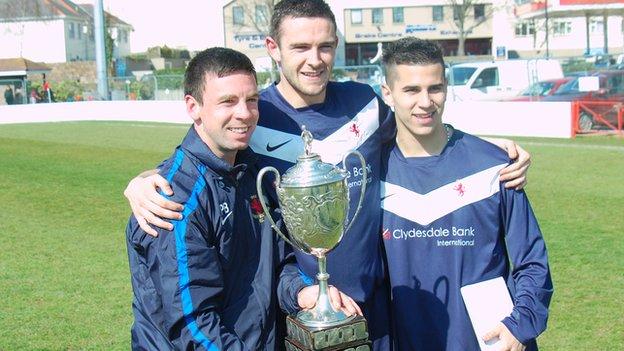 Both sides had struggled to create clear chances before striker Petulla popped up with the 93rd minute winner.

He latched on to Calum Brennan's through ball after a neat flick from Jamie Savory, before rounding the goalkeeper and calmly slotting in.

"St Paul's had most of the possession," admitted Scottish boss Pat Brennan.

"But it's the team that wins the game that's the best football team. Both teams know each other so well, it can look negative and nobody wants to make a mistake.

"We didn't know where the goal was coming from really. Charlie Petulla has been really good for us this year, he's only a young boy and he's going to be a fine player."

With both finalists from Jersey, the match was played at Springfield Stadium despite the tournament being Guernsey-run.

It was the second time this week that Scottish, who top the island's Premiership, had beaten St Paul's by a single goal.

On Tuesday night, Petulla's long range free-kick to send them through to the final of Jersey's Le Riche Cup.