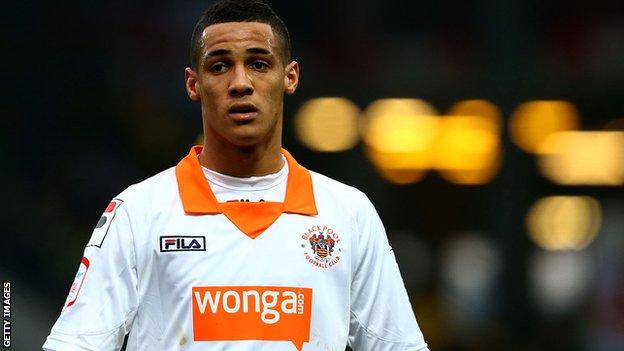 Blackpool winger Thomas Ince could be worth as much as £25m in the current market, according to his father Paul.

The 21-year-old was a January target for both Liverpool and Reading.

And Seasiders manager Ince said should be a benchmark for his son's valuation.

"If you're talking £15m for Zaha, Thomas has got to be £25m. If you compare the two, Thomas should cost more," he told BBC Radio Lancashire.

Youngster Ince, who began his career at Liverpool and was earlier this season, last month.

Ince has scored 18 goals in the Championship in 2012-13. Only Glenn Murray, Charlie Austin, Jordan Rhodes and Matej Vydra have found the net on more occasions in the division this term.

Wide man Zaha has been one of the star performers in the second tier this season and was rewarded for his excellent form with a first full cap for England against Sweden in November.

Blackpool boss Ince, who has said he does not want to sell his star player, continued: "Zaha is a fantastic player, don't get me wrong. Zaha's a stronger runner and does a lot of tricks, whereas Thomas is more direct, he makes things happen and he scores goals.

"You've got a kid playing in the Championship who has scored 18 goals. When you look at the leading scorers, they're all strikers, and he's there amongst them.

"Potentially, I think he can reach that value. If Palace want £15m for Zaha who has scored six goals, it makes you wonder what price he's going to be.

"You're not going to get it because he's not proven in the Premier League, but if United are paying £15m for Zaha, on the stats you'd have to say Thomas is worth a lot more than that. That's my opinion."

Meanwhile, striker Gary Taylor-Fletcher is nearing a return to first-team action after and on-loan forward Marko Futacs has gone back to parent club Leicester City.