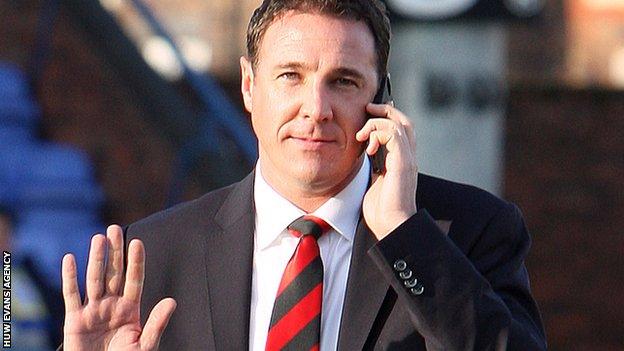 Cardiff City manager Malky Mackay has turned to Sir Alex Ferguson for advice as the race to the Championship title reaches its climax.

Mackay, 41, has called on his fellow Scot's "guidance" at various stages during his fledgling managerial career.

"We had a conversation a couple of weeks ago on [the promotion race]," said Mackay.

"He's been easily accessible and I've been able to pick up the phone and ask a question now and again."

A bond between the two has remained ever since, and the Manchester United manager invited his former team-mate to Old Trafford for a Premier League match against Mackay's Watford side.

Ferguson then used the family connection to borrow Watford's training ground before a Champions League tie, and brought the Manchester United squad to Cardiff in April last season to prepare for the crucial derby against eventual champions City.

While United fell agonisingly short of a 13th Premier League title under Ferguson last season, Mackay said no other manager could rival his compatriot's expertise in a title race.

"He's arguably the best British manager of all time," added Mackay. "If you can't learn for somebody like that, then I don't know who you can learn from.

"We had a conversation a couple of weeks ago on it."

He added: "They brought their squad down here towards the tail end of last season to prepare for one of their big games.

"They used our training pitch and the stadium for some privacy. I had a cup of tea with him then. He's someone that has helped us and it's not a bad thing to have."

Mackay will take his Cardiff side to his former club and promotion rivals Watford on Saturday with a seven-point advantage at the top of the Championship.

Victory at Vicarage Road, followed by wins against Barnsley and Nottingham Forest at home, will guarantee promotion to the Premier League for the first time in the club's history - and give Mackay the chance to face Ferguson in the dugout next season.

"The ambition of the football club is absolutely to be promoted," said Mackay of the prospect of leading Cardiff out at Old Trafford.

"That was my ambition when I came here 20 months ago, to try to help the club be promoted. That's something we're still striving towards."

Cardiff are set to be without striker Fraizer Campbell, a product of Manchester United's youth system, because of injury, while captain Mark Hudson continues is still out with an ankle injury.