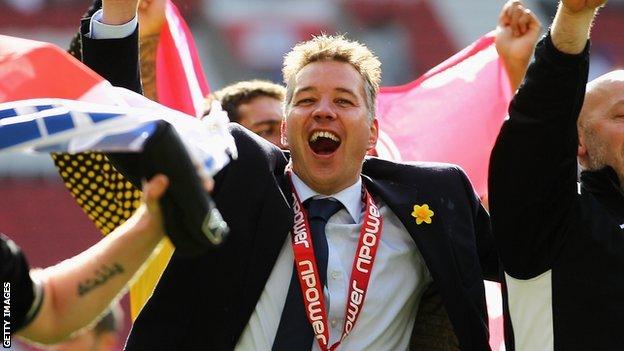 Posh are 23rd in the Championship, one place and one point below the Terriers.

at Old Trafford in 2011 to earn promotion.

"It's a bigger game than that, because this is now," Ferguson told BBC Radio Cambridgeshire. "We know that winning on Saturday would go a long way to keeping us in the division."

Posh travel to the Galpharm Stadium with just one point separating the six teams between 18th and 23rd.

But Ferguson's side are in their best form of the season, having gone seven undefeated, while Huddersfield have lost three of their last five.

"I know at the moment we've got real confidence, real belief," said the Posh boss.

"We're playing catch-up, but teams are looking over their shoulders, there's no doubt about that, big teams as well - Blackburn are just a point above us.

"I'm very comfortable with that. I'd be very happy to overtake them all on May the fourth [the last day of the season].

"There are so many teams involved with it, which is a good thing. We play the team right above us on Saturday, it's a game we're looking forward to."