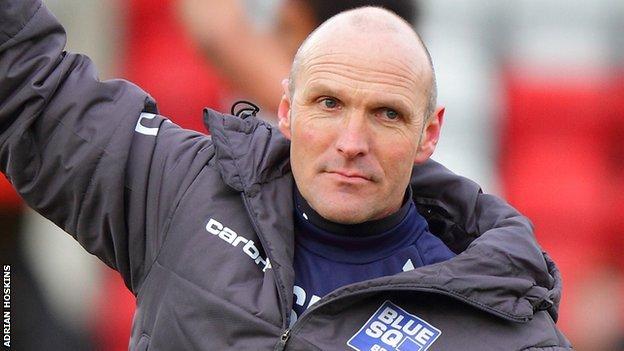 Kidderminster boss Steve Burr has urged his side to capitalise on being top of Blue Square Bet Premier with just three matches left to play.

Harriers are currently a point clear of Mansfield who have two games in hand.

"The season's been good but we really need to achieve something at the end," he told BBC Hereford and Worcester.

"There's a great opportunity for us to go up either as champions or in the play-offs - beating Lincoln will keep the pressure right on Mansfield."

Mansfield lost 2-1 at third-placed Wrexham on Thursday - the first of three matches they have to catch up on.

We can only look at ourselves and win our games, then it's down to Mansfield to cope with the pressure

Strangely, those two sides must face each other again on the last day of the season, this time at Field Mill.

Kidderminster are already guaranteed a play-off spot after after winning 2-1 at Luton on Monday.

"We've done very well and it's a big improvement on the last couple of years where we've just missed out [on the play-offs]," Burr continued.

"The players all want to finish on a high and if we don't win the league we'll just get on with it."

Harriers take on Lincoln City on Saturday, with the Imps much-improved since appointing Gary Simpson as their new manager in late February.

The league leaders must then travel to Wrexham's Racecourse Ground the following weekend.

"I watched Lincoln play Wrexham a couple of weeks ago and they've done well since the new manager came in, as teams often do," Burr added.

"It'll be a tough game but the way the lads are going I'm confident we can get the three points.

"We can only look at ourselves and win our games, then it's down to Mansfield to cope with the pressure."