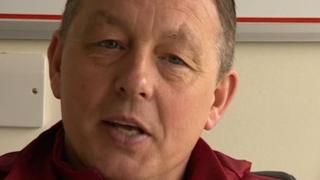 Majewski 'can be great goalscorer'

Nottingham Forest boss Billy Davies talks to BBC Late Kick Off Midlands about the impact of Polish midfielder Radoslaw Majewski, as his club look to cement their place in the Championship play-off zone.

"He's a tremendous talent, a great creator, and he can be a great goalscorer," Davies said.

Davies brought the 26-year-old to the City Ground, initially on loan, in July 2009 - and since he returned as manager in February Majewski has played a central role in Forest's unbeaten run.

Late Kick Off Midlands has a feature on Majewski at 23:20 BST on BBC One on Monday. The programme will be on the BBC iPlayer from Tuesday.