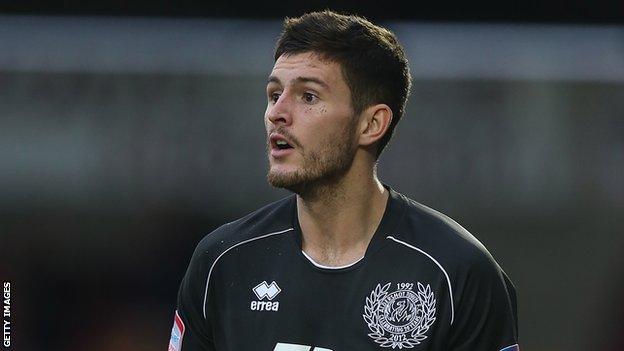 Aldershot Town utility man Aaron Morris has been ruled out of the rest of the season with cruciate ligament damage.

The 23-year-old, who played 44 times this season, was stretchered off in the 3-2 win over Oxford on Monday.

Shots boss Andy Scott told BBC Surrey: "It is a massive blow for the lad and for us as well. He has been fantastic for me since I have been here.

"I spoke to Aaron and he is obviously devastated. We will do what we can as a club to help him and look after him."

Scott added: "We are probably looking at hi missing six or seven months.

"He is out of contract at the end of the season so we have got to put a plan in place to make sure he is still with us and given a chance for next year.

"We are not obliged to but I will be speaking to the board and the chief executive to make sure he is looked after."

Former Cardiff trainee Morris, who can operate across the defence or in central midfield, has made 114 appearances for the EBB Stadium outfit since he was brought to the club by Kevin Dillon in July 2010.

Scott is keen to keep the former Wales Under-21 international in Hampshire despite uncertainty over which division they will be in next season.

"We have got duty of care, medically," Scott said.

"We wanted to keep him next year so that doesn't change my plans.

"Hopefully we can get him back in October or November time and get a lot of next season out of him.

"Financially it will have to be looked at but we will do what we can to make sure he is with us next year and looked after while he is still injured."

Scott has sympathy for Morris, having suffered a similar injury during his playing days.

"I did my anterior cruciate ligament back in 1992 and have got two massive scars and screws in my knee to prove that," he said.

"Times have changed and now it's key-hole surgery and the rehab can start relatively quickly after the injury.

"We'll have to look and see if there is any other damage in there as there may be other bits and pieces that have happened in the incident for the injury."

The Shots, who are currently bottom of League Two, are next in action at Port Vale on Tuesday.