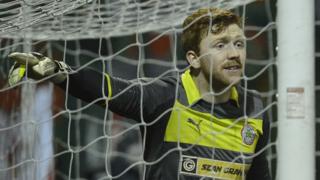 Cliftonville goalkeeper Conor Devlin and Crusaders stopper Sean O'Neill square up ahead of Saturday's Irish Cup semi-final at the Oval.

Devlin has been in impressive form for the Reds this season, while O'Neill has recovered from a shoulder injury earlier than expected.

The Crues are hoping for revenge after losing 3-1 to their north Belfast rivals in their Premiership game at Solitude on Tuesday.