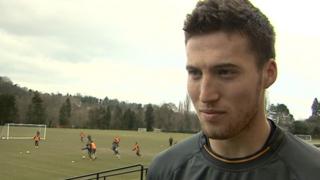 Doherty determined to beat the drop

Young Wolves defender Matt Doherty made his Premier League debut at Anfield and he is determined that he will not start next season in League One.

The 21-year-old Dubliner, who spent the first half of this season on loan at Bury, has played the last seven games for Wolves which has coincided with an upturn in form which has eased their fears of relegation from the Championship.

Having lost their Premier League place last season, Dean Saunders' side on a run of four wins in five games and the performances of Doherty at right-back and Liverpool loanee Jack Robinson on the other flank, have been a major factor.

Meanwhile, Late Kick Off talks to manager Dean Saunders on Monday at 23:20 BST. The programme will be available on the BBC iPlayer from Tuesday.