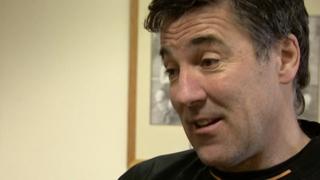 'It's coming together' - Saunders

Wolves boss Dean Saunders needs just seven words to sum up life at Molineux: "Torrid season, but it is coming together."

Saunders takes his team to Bolton on Saturday on a run of four wins in five games - yet Wolves remains only a point clear of the Championship relegation zone.

The Welshman tells BBC Late Kick Off Midlands that he is banking on at least two more wins for Wolves to avoid back-to-back relegations.

He also pays tribute to the young players who have been drafted into the team - Matt Doherty, Jack Robinson and David Davies.

Late Kick Off Midlands is on at 23:20 BST on Monday and available on the BBC iPlayer from Tuesday.