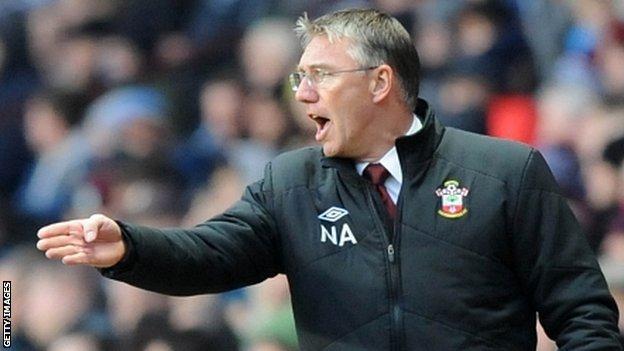 Adkins was sacked despite leading the club to successive promotions.

He was replaced by Mauricio Pochettino and the Argentine has since steered the club to victories against Manchester City, Liverpool and Chelsea.

"The manner in which he has come in and lifted the club to a new level shows it was a decision that's been proved right," Davis told BBC Radio Solent.

Adkins's dismissal on 18 January came after a 2-2 draw with Chelsea and despite the club being three points clear of the relegation zone.

The 47-year-old is the new manager of Reading - who Saints take on this weekend - and goalkeeper Davis says he was not surprised to see him return to football so quickly.

"I'm sure he wanted to get back into football as soon as he could, most managers that move on from a club want to stay in the game," he said. "From that side of it, it doesn't surprise me.

"We achieved a lot while he was at the club in a short space of time and the club is continuing to grow without him now.

"A lot has been said about our wins against the big teams but it is about winning every game and putting yourself in a position when you are looking up the table rather than behind us."

Davis, 36, added that the arrival of Pochettino has resulted in a change of mentality and spirit at the club.

"We are in a state of mind where we can feel we can win every game at the moment and we will go there [Reading] to do that" he said.

"There's certainly been a raising in player performance. The lads have reacted positively to it [his arrival]. Mauricio and his staff have come in and communicated very well and everything they are trying to pull off the lads are soaking up and fortunately we are putting that into our performances."