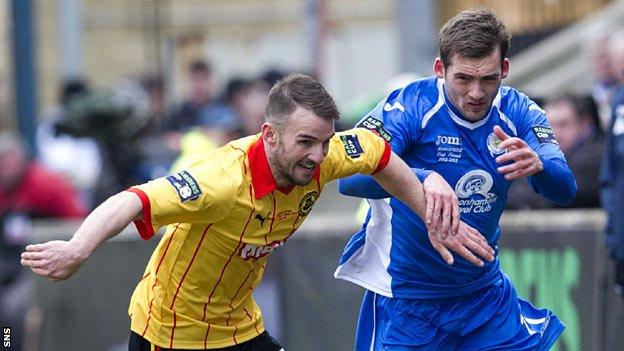 Queen of the South lifted the Challenge Cup for the second time after a penalty shoot-out victory over Partick Thistle.

Partick's chances looked over when Aaron Muirhead was shown a red card for a headbutt after missing a penalty.

The Glaswegians dominated the early play, pushing the ball forward quickly at every opportunity and winning a series of corners, although without creating a clear opportunity.

Clark passed up a glorious opportunity late on in a quiet first half, firing wide from two yards at the back post after Derek Lyle flicked on a Chris Mitchell corner.

The second half began quietly, but a positive run from Clark split the Partick defence and his curled right-footed effort drew a fine one-handed save from Fox.

However, despite sporadic chances, the game was no classic, with plenty of misjudged passes and poor decision making nullifying attacking moves.

A set-piece was looking the most likely source of a goal, and Chris Mitchell's high looping free-kick was met by Mark Durnan, but his flicked header flashed narrowly wide.

Sean Welsh countered for Partick, curling a free-kick over the bar from the edge of the box as the final lurched towards extra-time.

Both defences looked jittery as the 90 minutes drew to a close with Robinson forced into a terrific save from Thistle sub Doolan's low shot.

Doolan began extra-time brightly, flashing a low shot from the angle just past Robinson's left-hand post inside a minute.

Carmichael tested Fox with another low effort before Thistle substitute Christie Elliot blazed over after breaking into the box.

But Queens the struck as Carmichael cut inside from the left and his curling, lofted shot rebounded off the bar. Clark was on hand to head the ball home for his 34th goal of the season.

Partick pressed ever more frantically for an equaliser, and Ross Forbes went close with a free-kick which was parried by Robinson.

Then, with two minutes left on the clock, Marc Fitzpatrick brought down Elliot and referee Crawford Allan awarded a penalty, although the offence looked to be outside the box.

Muirhead's penalty was parried over the bar by Robinson. The defender reacted angrily and, after a melee, he was shown a red card for a headbutt on Queens captain Chris Higgins.

But in the final seconds Doolan tapped in Forbes' cross at the back post to take the match to penalties.

Despite misses from Steven O'Donnell and Danny Carmichael, the spot-kicks went to sudden death. Balatoni's penalty was saved by Robinson to send the cup south to Dumfries.

"I'm not sure how neutrals would see it, but that was a whole-hearted match with both teams having a real go.

"Partick are a good team with a lot of good players and I thought we did well to stop them playing today.

"And I think, second half, we maybe just deserved to win the game.

"I'm trying to find the goalie - what a save to win it for us, he's got a lot of confidence and and he came good at the right time."