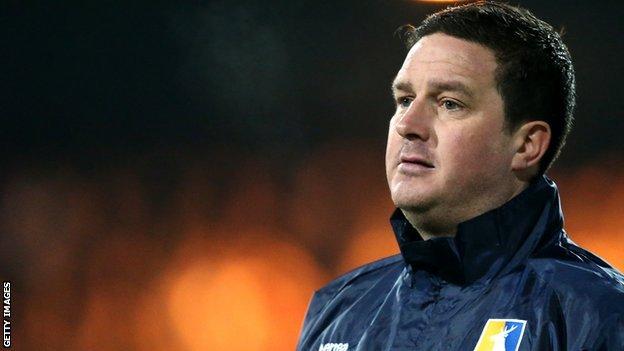 Mansfield Town boss Paul Cox insists he is more concerned with his players' ability to respond to defeat than the end of their 12-game winning run.

Wrexham stopped the Stags from going top of the Blue Square Bet Premier with a come-from-behind win on Thursday.

"It is easy when you are getting pats on the back and winning every week.

"We were never going to carry on winning ever game. Now we will see what characters we have got," Cox told BBC Radio Nottingham

The result left the Stags still trailing leaders Kidderminster Harriers by a point, but with two games in hand, with third-placed Wrexham a further seven points back.

"I'm prepared for this season to go down to the wire. Like I've said all along, there are going to be twists and turns," said Cox.

He is confident his players will bounce back strongly against struggling Barrow on Saturday, including goalkeeper Alan Marriott, who Cox felt could have done more to prevent Dean Keates' deflected equaliser in their 2-1 defeat.

"I don't want to be too hard on the lad because he has been great for us this season," he added.

"We have five big games ahead of us and Mazza has got the opportunity to be the hero during the run-in."