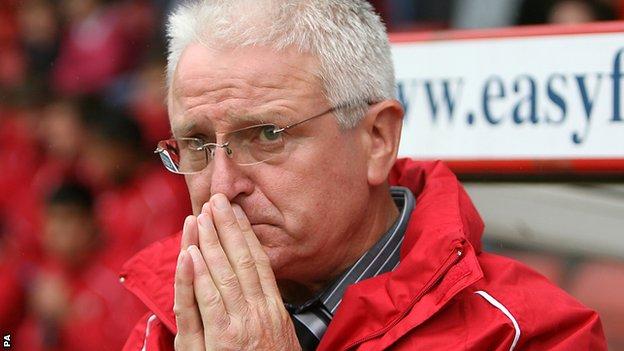 Jimmy Mullen is keen to return to the Bucks Head to fill the AFC Telford managerial vacancy - 10 years on from his last brief spell in the hot seat.

The much-travelled Mullen, 60, had a short spell in charge of Telford United in 2003-04, the season they folded.

"I'd love that job," he told BBC Radio Shropshire. "It would be fantastic.

"If I could do a job there for two or three years I'd be more than happy. Football's been in my blood since I was 15 - I still have a lot to offer."

Mullen started at Sheffield Wednesday, enjoying over 200 games for the Owls, also appearing for Rotherham, Cardiff and Newport in a playing career lasting 17 years.

He has been in charge of four league clubs, Cardiff City, Burnley, Blackpool and Walsall during a 29-year managerial career.

After being sacked as sacked as Walsall boss in January 2009, he then joined Rotherham United as number two to Ronnie Moore, but they lost their jobs in March 2011.

Mullen, who still lives in Shropshire, then took over as manager of Telford's non-league neighbours Market Drayton Town in October 2011, but he left his position, despite having established them in mid-table of the Evo-Stik League South over the last two seasons.

Telford, relegated to the Blue Square Bet North last Saturday, currently have John Psaras in charge until the end of the season - the fourth manager they have had since Christmas.

After sacking Andy Sinton in January, Mark Cooper took over for just a month before joining Swindon Town and the next man in, Graham Hyde resigned just 10 days later.